Impressions from a gathering tour with Nissim Krispil If gathering is an inherent trait of man, Nissim Krispil surely belongs to a tribe of gatherers. He has been researching plants for decades, collecting stories on the use of wildflowers for food and medicine by Beduines and Arabs in Israel, Morocco, and wherever he sets foot. In his books, he preserves knowledge transcribing it from speech to text. I joined a group of 20 individuals who "gathered" Nissim and, for several hours, wrote every word uttered by him, bending down, leaning on the ground, collecting leaves and roots in their baskets. Watching this, I imagine what would have happened if the COVID and education administrations had instructed us to go out to nature instead of isolation. 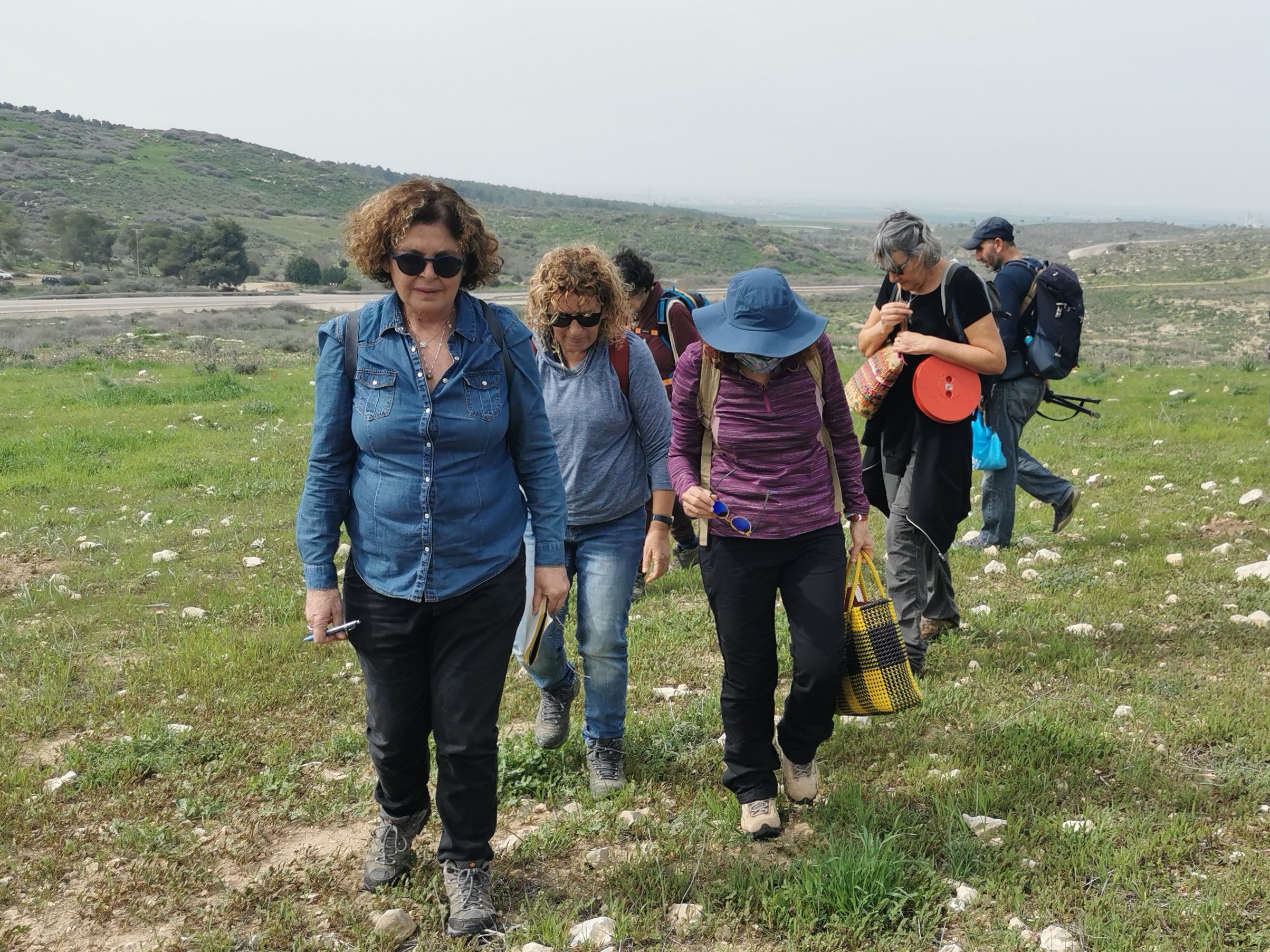 Unlike bird and star watchers, the eyes of the gatherers, whether walking or standing, are mostlydirected at the ground.

As if in an ancient ritual, we gather around the Mandrake, listening to the stories and interpretations. "In the days of wheat harvest Reuben went and found mandrakes in the field and brought them to his mother Leah. Then Rachel said to Leah, "Please give me some of your son's mandrakes. But she said to her, “Is it a small matter that you have taken away my husband? Would you take away my son's mandrakes also? Rachel said, Then he may lie with you tonight in exchange for your son's mandrakes.

To which part of the plant intends the scripture in Genesis 30? To the leaf? The flower? The ripe or unripe fruit? What have the Romans done with it? When do the Bedouins use it? How much Estrogen is in it?

Literature using the name of a plant is not necessarily a reliable botanical resource, as seen in Naomi Shemer's song, where contrary to what she writes, the saltbush is odorless and does not grow on water. 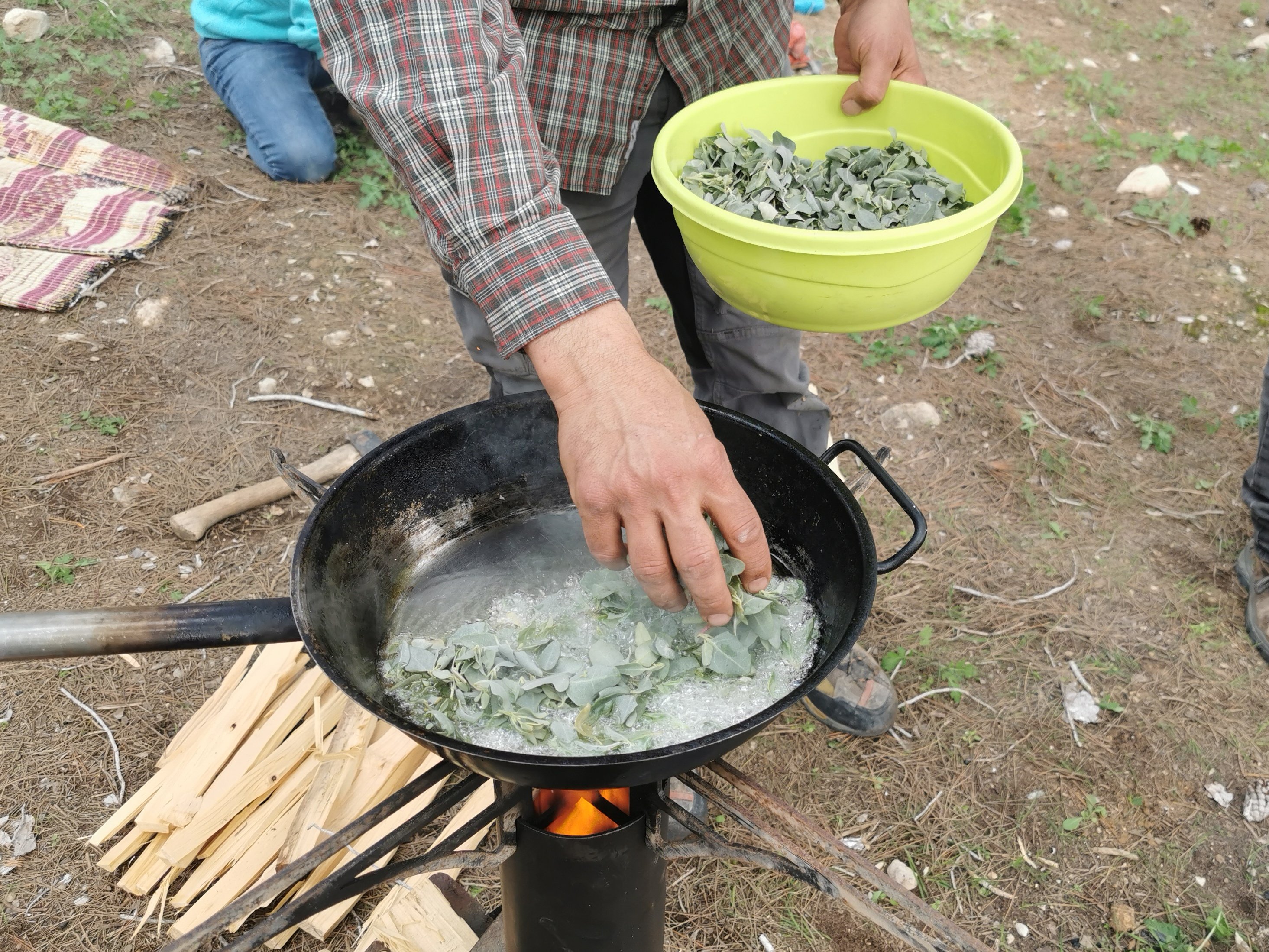 Nissim praises the saltbush and notes that it has hypoglycemic substances that lower blood sugar levels. We gather leaves, distinguishing winter from summer ones. We will separate them from the stalks at the end of the tour and fry them. The sage leaves we preserve for the tea. 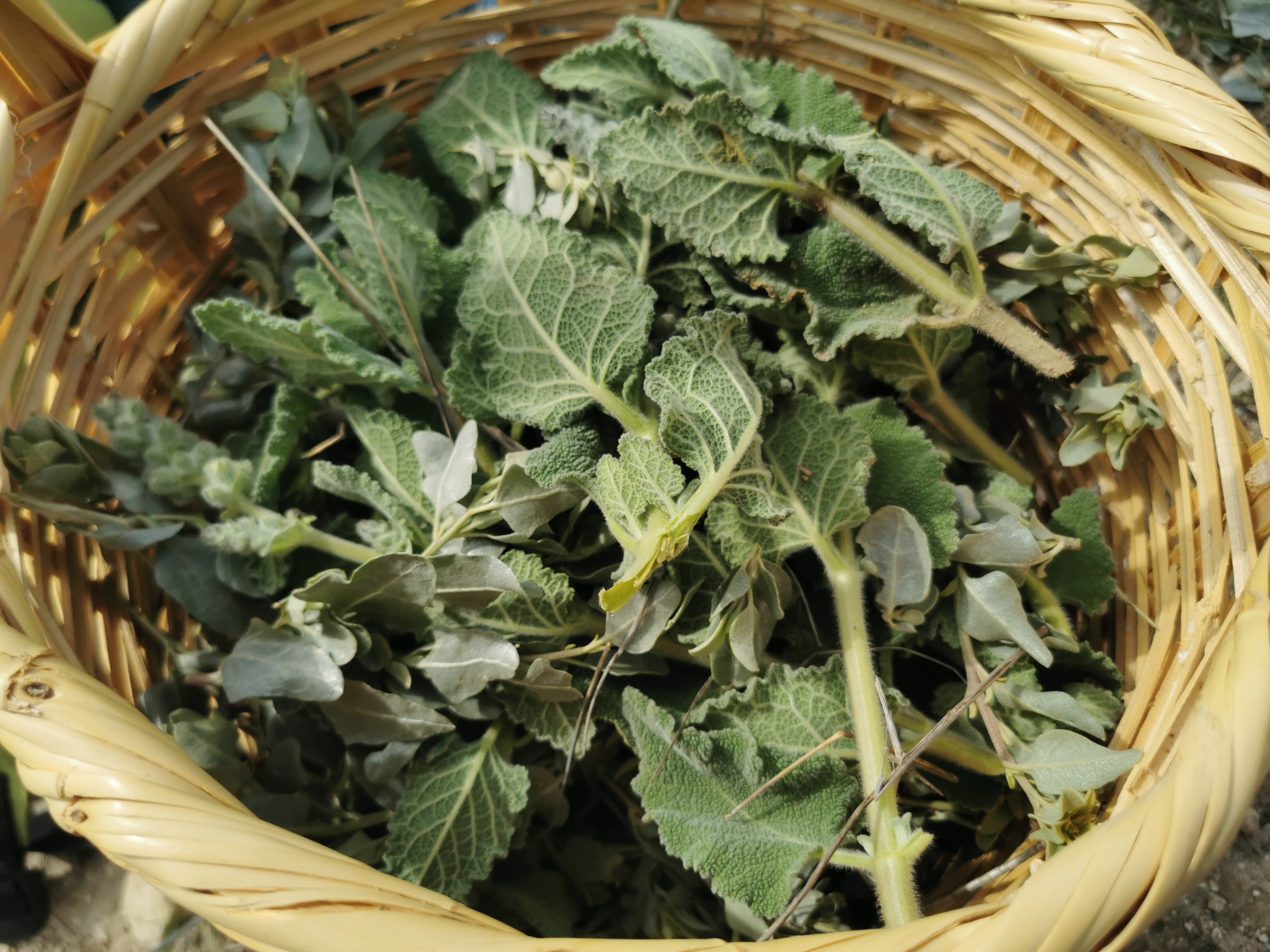 The bags and baskets fill with leaves, stalks, and roots. We cross the chive fields, occasionally tasting a flower, like insects. I see the chive's roots for the first time and learn to distinguish new from one-two-year-olds. In a Whatsapp group after the tour, they will discuss the particulars of how to macerate them for medicinal use.

Every mention of the term "chive" satisfies the eye, the palate, the possibility for healing the skin, and fills me with longing for my mother, Irit (meaning "chive"). 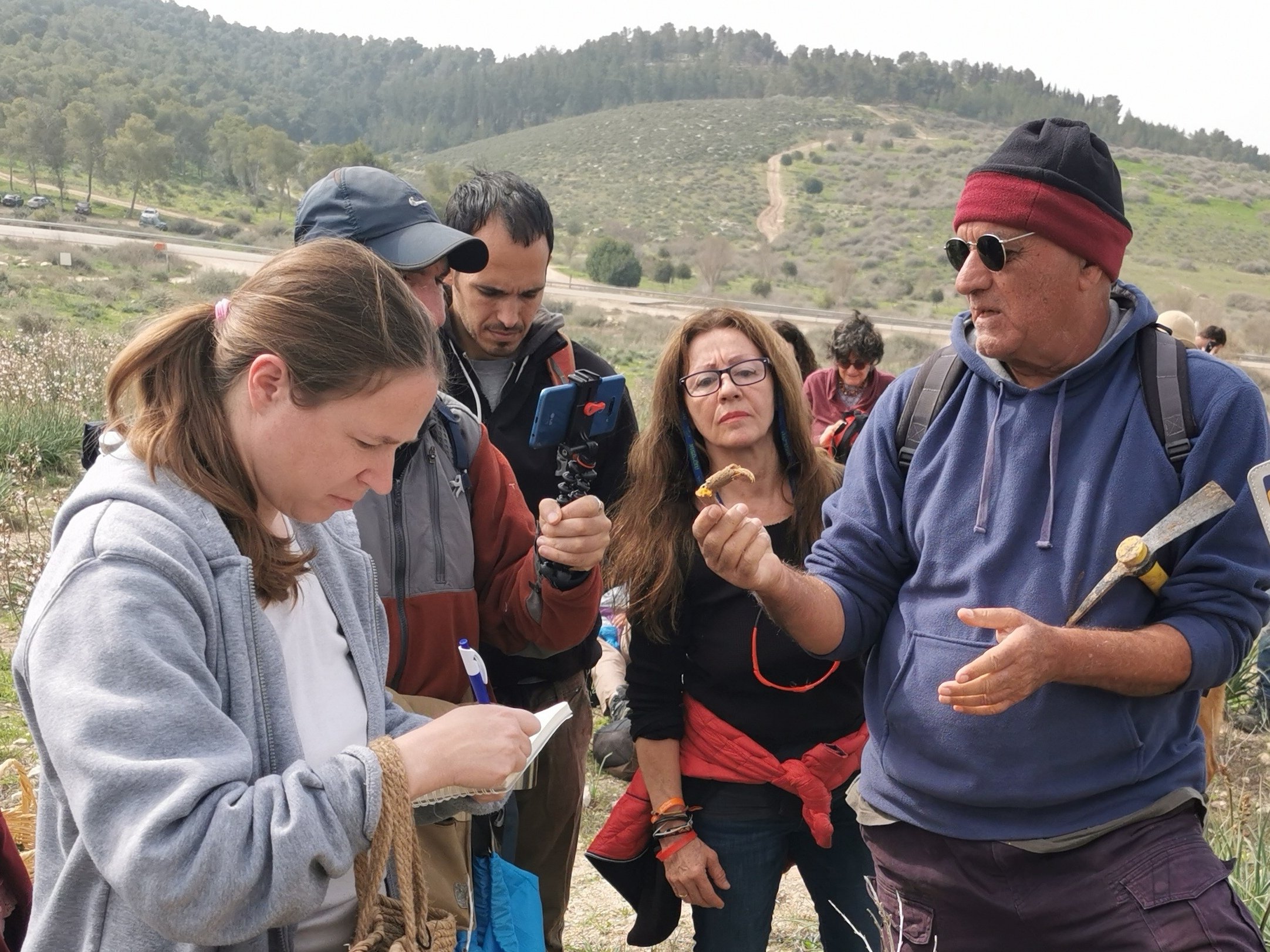 It is not just knowledge of wildflowers passed among the group members. I see Nicola, a therapist with golden hands, putting her hand on someone's back. This is what it looks like when a person inserts himself wherever he is. Ran prepares the wooden chips for burning in the hand-made rocket stove. Sharon cuts the sour-dough bread she had made and adds it to the food on the shared table. 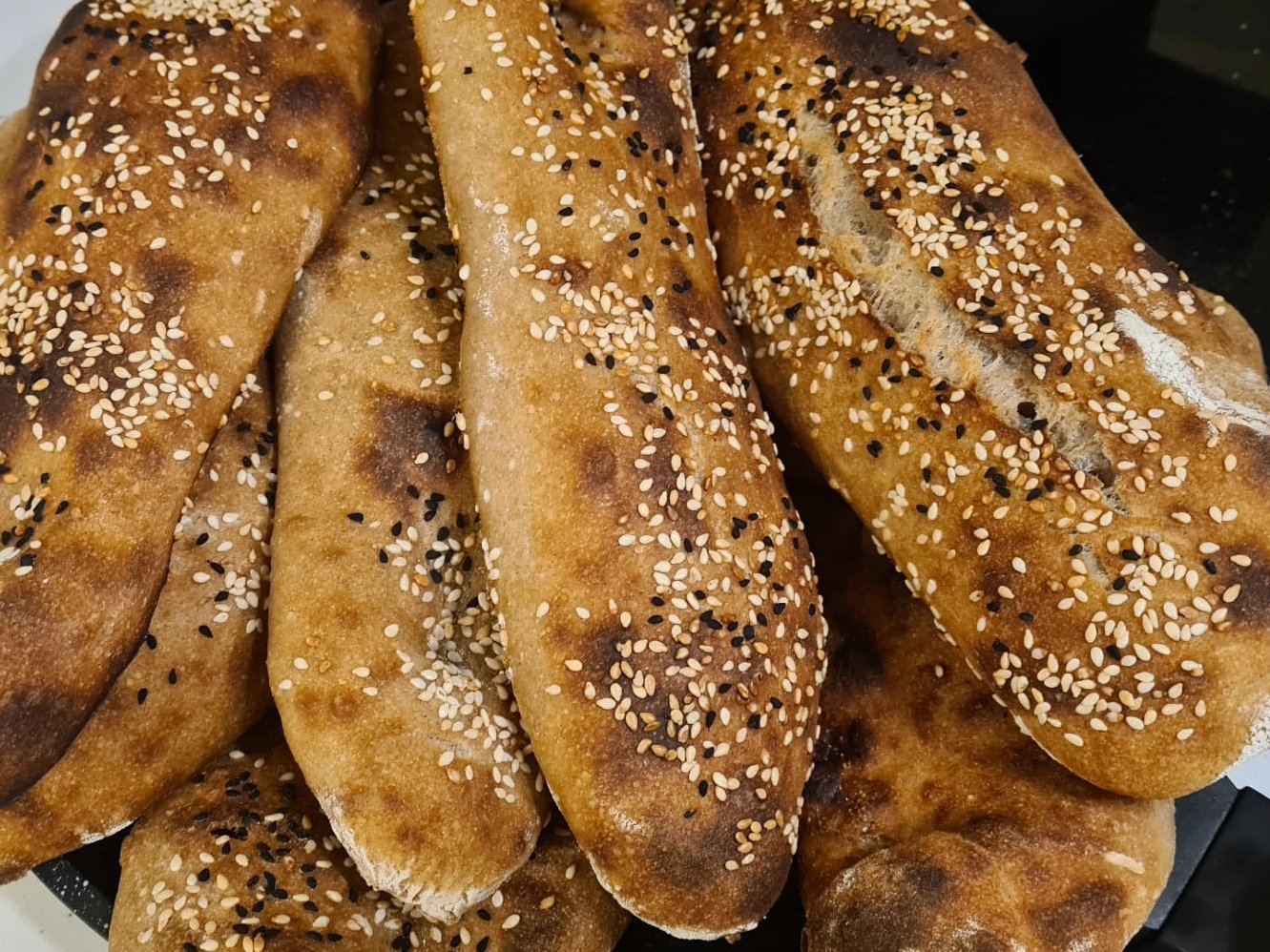 A group of women sits on the mats, slicing fennel for the omelette and separating the saltbush&#39;sleaves. I wonder if it is a mere coincidence that the women are working together to prepare the food, whereas making fire is a solitary task. Perhaps I should seek the origins for this in the difference between hunters and gatherers. The fire gathers people; Nissim stirs the fried saltbush leaves, and Ran adds the wood chips as the fennel and chive tea cook in the kettle. 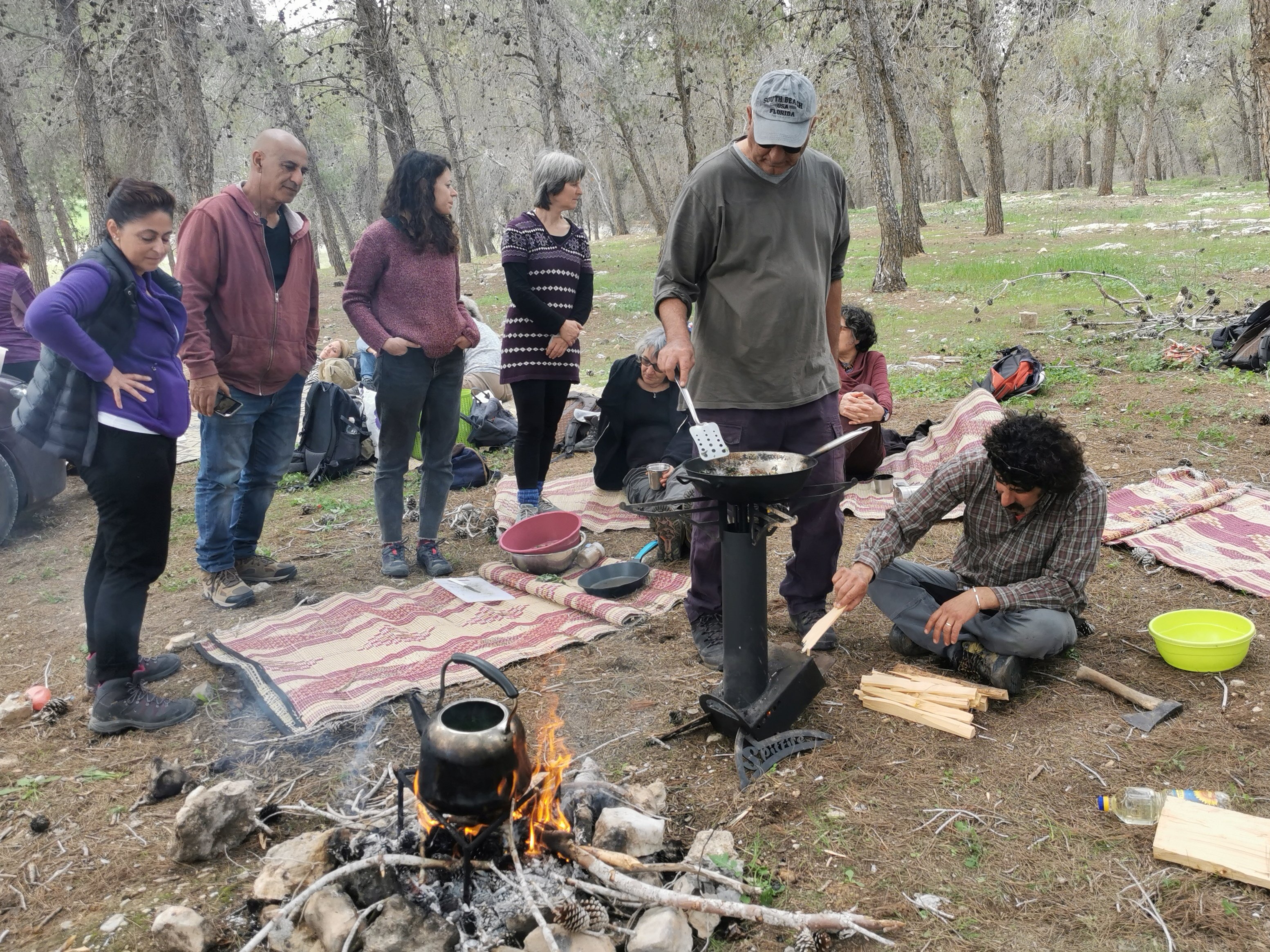 Nissim's fascinating stories linger long after the meeting. The vast knowledge that he gathered, of which we only got a taste, reflects the relationship with nature of many generations. The knowledge that used to be accessible in every household is now vanishing as the wild fields are depleting. Perhaps the modern gatherers can restore parts of it and make it accessible to all once again. It would take a miracle (a pun on the name "Nissim" meaning miracles).